The Texas Squeeze: A series examining the high cost of high growth in North Texas.

Travel is back, but airline tickets aren’t quite what travelers remember.

Ticket costs for the upcoming summer travel season have already surpassed pre-pandemic levels from 2019, and airline executives are hinting that more price hikes could be ahead.

Round-trip tickets this summer out of DFW International Airport and Dallas Love Field are 29% higher than they were during the same period in 2019, and flying to hot summer destinations such as Chicago and Las Vegas is 80% pricier, according to travel company Hopper.

That’s just the beginning of where airfares could be headed as passengers flood airports and airlines push prices higher to compensate for elevated gas prices, rising labor costs and a shortage of pilots that’s limiting the number of flights.

“The short way to say it is we are seeing a lot of strength in the fare environment with customers who frankly value the quality of product that we have and are willing to pay us to fly,” said American Airlines chief operating officer Vasu Raja during the company’s recent earnings call. “So we’re encouraged by that and we see those trends going forward into the summer.”

For the nation as a whole, the average round-trip ticket price in March was $540, up 41% from a year earlier, according to ticketing firm Arc. Prices haven’t been that high since June 2015.

CEOs at United Airlines and Delta Air Lines said they haven’t seen pushback from consumers who are paying higher prices to travel this summer. In fact, United CEO Scott Kirby said airfares still have room to grow because of the inflation seen since the last time travel demand was close to this high in 2019.

“Another macro way to think about this is we’re just now getting back to 2019 levels of revenue,” Kirby said. “Arguably there’s another 16% to go.”

Travel experts also are warning that tickets are only going to get more expensive because travelers are still in their peak buying window for the summer season and the cheapest seats are already gone.

“If you do see something that is a good deal, jump on it, because as more tickets are sold, flights are more expensive,” said Jeff Klee, CEO of Cheapair.com. Klee recommends that travelers buy tickets three weeks to four months in advance for the best prices, with the best deals coming about 75 days before travel.

Airlines are seeing cost pressures just like other segments of the economy are facing logjams as the world emerges from the restrictions and disruptions of the COVID-19 pandemic.

But rising prices follow the principles of Economics 101 — there is too much demand and too little supply. Despite efforts to ramp up flights as quickly as possible for the summer travel season, the nation’s four largest carriers are planning about 12% fewer flights between June and August than they did a year ago.

“Demand is as strong as we’ve ever seen it,” said American Airlines CEO Robert Isom.

Airlines would add more flights if they could, but employee unions are already warning that flight schedules have increased far too quickly after the struggles and cutbacks of the pandemic. Pilots and flight attendants are warning that flying too much could create massive waves of cancellations and delays to go along with those big summer crowds.

Isom said American is “sizing the airline for the resources that we have,” and Delta president Glen Hauenstein said “the priority is to operate reliably and the other priority is do not get ahead of demand.”

Airlines are also dealing with some supply and labor problems. Boeing has halted delivery of its signature widebody 787 Dreamliner jets, cutting into the ability of American Airlines and other carriers to fly, particularly to long-haul destinations. American has already cut flights from DFW Airport to places such as Santiago, Chile, and has delayed the launch of flights to Tel Aviv, Israel.

The long-building shortage of pilots is also cutting into flight schedules.

American, Southwest, Delta and United have been able to bolster pilot ranks by poaching captains from smaller regional airlines. But that leaves regional carriers, such as SkyWest, Mesa and American’s American Eagle-branded carriers, short of pilots. Isom said regional airlines are flying about 20% less this summer than in 2019. That puts a major crimp in the ability to ferry passengers from small destinations to hubs such as DFW.

Airlines are seeing dozens of reasons to justify high prices.

The labor shortage is pressing airlines to raise wages. Inflation is increasing the costs of everything from airplane parts to toilet paper. Jet fuel is 140% more expensive than a year ago, according to the International Air Transport Association. In normal times, fuel makes up about 20% to 25% of the price of an airline ticket. The increase has cost the global airline industry about $107 billion.

For example, Fort Worth-based American spends the equivalent of $95 million more a year every time the average price of oil increases by $1, according to ratings firm S&P Global. At Dallas-based Southwest, it’s about $45 million with every $1 increase.

Higher prices for jet fuel don’t necessarily mean ticket prices will go up, but it does increase the costs for every airline, said S&P Global senior transportation analyst Philip Baggaley.

“The run-up in oil prices and jet fuel is pretty substantial, and airlines consume lots of fuel,” Baggaley said. “They are looking at hundreds of millions in higher expenses.” 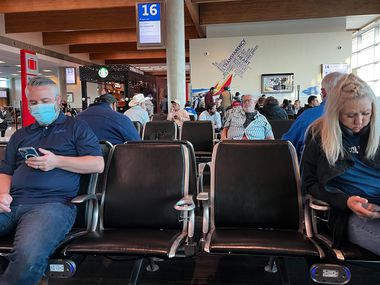