“This year, we’re expecting 22 million people to fly out of the airport, which is double what the airport served when we first opened,” said Sam Haynes, public information officer for AUS.

AUSTIN, Texas – It was a jam-packed Memorial Day at Austin-Bergstrom International Airport (AUS).

AUS is expecting to shatter travel records for this weekend and for the summer ahead.

“This year, we’re expecting 22 million people to fly out of the airport, which is double what the airport served when we first opened,” said Sam Haynes, public information officer for AUS.

An estimated 32,000 people flew out of AUS Monday alone. TSA lines were thankfully not bad, but check-in was another story, particularly the line for British Airways Monday evening.

“We didn’t expect the queues to be this big but they’re still crazy big,” said Ava Christensen Cregan, who’s headed home to Dublin.

Another bottleneck was the drop-off line outside.

“The line for departing passengers is all the way down the ramp a long ways,” said Steve Metcalf.

“Once you got parked, it was hard to get out. People are not very friendly in Texas,” said Pia O’Hare, who drove her family to the airport.

Despite these headaches, AUS saw only a handful of flight delays and cancellations Monday evening, on the heels of more than 5,000 canceled flights across the country over the holiday weekend.

“We are asking you to plan ahead and come prepared,” said Haynes.

Heading into summer, airport officials recommend arriving two and a half hours before boarding for domestic flights, three hours for international, unless you have TSA Pre-Check.

“Make sure that you have enough time in case our TSA partners or airline partners end up having an unplanned staffing shortage,” said Haynes. 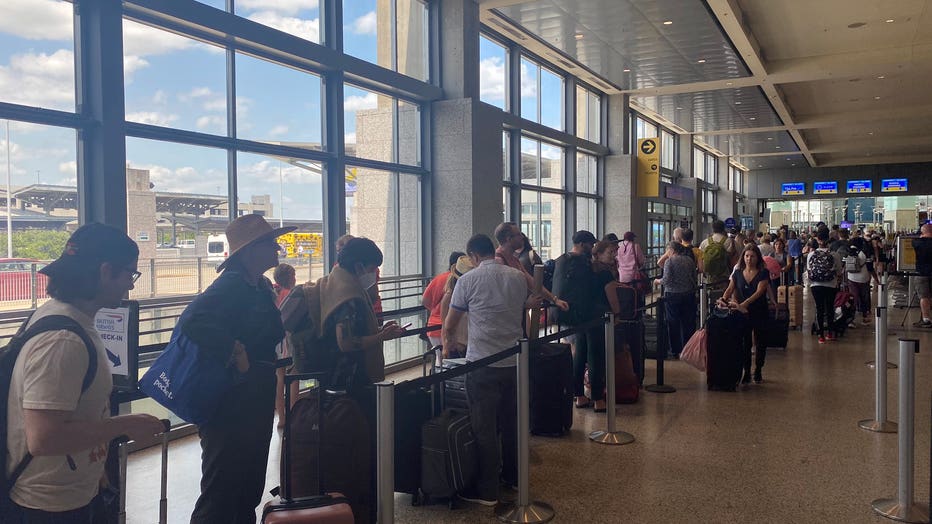 To speed things up, consider checking in online, check with your airline before you leave to make sure your flight is on time, check the TSA website https://www.tsa.gov/ to ensure you’re not brining any banned items, and if you’re parking, reserve a spot ahead of time https://www.abiaparking.com/.

Mornings are expected to be very busy at AUS. If you’re dropping someone off, a reminder, you can use the lower level, it might save you a few minutes.