Like a piece of inky ribbon, the mountain road begins its long descent to the shimmering Romsdalsfjord below. Gathering speed, I adjust into a more aero position, the mixed woodland of deciduous and coniferous trees flying past in a blur, gradually giving way to open pastures awash with yellow flowers and pink blossom.

After twenty minutes, the road levels, now flanked by a narrow pebble beach and the occasional barn, painted in the traditional “falu red” colour of Norway (originally made from a mining by-product with excellent anti-weather properties, a formula dating to the 17th century). Two small wading birds take flight; seaweed wafts in the air, restoring my focus like smelling salts after the spellbinding descent. For the next 110km, I pedal and freewheel in refreshingly short bursts, rarely straying more than a stone’s throw from the waterline. The asphalt is almost flawless, and there is a total absence of traffic, leaving me simply to enjoy the parade of jaw-dropping panoramas.

Back at my base camp, the Storfjord Hotel, I put the bike away and sink into the outdoor hot tub with a beer, admiring the views of Norway’s fifth longest fjord. There’s just time for a restorative massage before a meal of local hake with hollandaise, an off-menu pasta dish (knocked up at my request), and chocolate fondant with caramel popcorn to finish. The chef, Ingeborg Valde, was born in the village, a theme I find repeating as I chat to staff and locals alike. It is easy to see why you’d want to come back – or never leave. 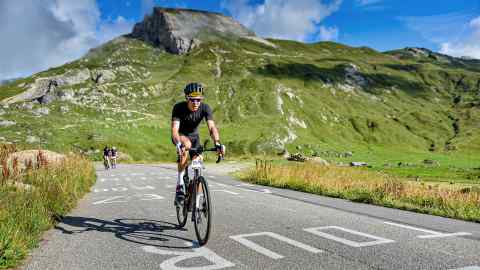 It’s my first visit to the Sunnmøre Alps on Norway’s west coast, a 55-minute flight north-west of Oslo. Etched from glaciers millions of years ago, the fjords plunge as deep as 679m, and the snowy peaks soar up to 1,700m, sometimes near vertically from the water. Despite the late-May days being already long, and quite warm, one of the locals I ride with recounts his nearby skiing outing of the day before. It’s obvious this is an adventurer’s paradise.

It’s a condensed version of Ride The Fjords, a new six-day cycling adventure run by one of Norway’s top-end hotel owners and tour operators, 62°Nord. My past international cycling trips have always consisted of the obvious destinations in mountainous central Europe; I’ve never given Norway a moment’s thought. But this challenge has promised the ultimate blend of challenge and luxury, set in an entirely new and clearly dramatic landscape.

The fully loaded itinerary, which includes RIB and helicopter excursions, sees groups of up to 12 staying between two of 62°Nord’s fjord-side hotels whilst enjoying fine Nordic food and drink. All cycling needs are overseen: an ex-pro guides along the region’s best routes, and a fully stocked support vehicle, complete with mechanic, follows all day. Covering 400km with 2,500m of climbing (across five actual riding days), the exertions are designed to be testing but not flat-out gruelling (though if a private group is thirsty for more, additional mileage can be factored in).

Top end Fara F/AR bikes – fittingly, a Norwegian brand – are provided for every guest. They are just the job: built for mixed-surface use, and fitted with wider tyres for the occasional gravel stretch riders negotiate. Initially, I was concerned these would slow on-road progress, but any difference in speed is barely noticeable (and the extra comfort they bring for long days in the saddle more than compensates). I was in fact a gravel virgin, but the challenge was enjoyable; and I unexpectedly liked this versatile, comfortable bike by trip’s end.

On the second day, after a leisurely, hearty breakfast, I roll out from the hotel at around 9am for the short ride to the Magerholm-Sykkylven ferry, which crosses the Storfjord. These ferries are a fixture of the scenery, plying the glassy water between islands. The bridges – such as those of the nearby Atlantic Ocean Road, as featured in No Time To Die – are a more striking sight. It’s a bluebird day, just some high, wispy cirrus clouds. I ease into the ride, and once again find myself gobsmacked (and delighted) by how little traffic there is on the road – and by how much not having one eye constantly trained back over one’s shoulder elevates the entire cycling experience.

The undulating roads harbour a handful of few-hundred-metre climbs, perfectly apportioned to get the pulse racing without pushing too early into proper lactate accumulation. As I gain altitude, I pass the ski resort of Stranda; patches of snow get bigger, and ice floats in the lakes. When I descend to a small, unassuming dock, a black RIB and captain are waiting. My bike is put in the back of the support vehicle, from which I pull on a full-length weatherproof suit over my cycling gear.

The RIB slices effortlessly through the glassy water; the pilot, Maria, whose family has lived in the area for several generations, eases up every so often to point out landmarks. Among them is the UNESCO-protected Geirangerfjord, considered one of the most scenically outstanding fjord areas on the planet. Numerous waterfalls cascade down sheer walls. I’m genuinely spellbound.

After an hour on the fjords I’m reunited with my bike in Hellesylt, and pedal onwards through the enchanting valley of Norangsdalen. It’s one of the narrowest in Norway, with peaks soaring high either side and a series of bright-turquoise meltwater lakes (one of which is home to the sunken village of Lygnstøylvatnet). I pull over for a much needed late lunch at Hotel Union Øye. First opened in 1891, it sits at the end of one of the staggeringly steep Norangsfjord; each of its decadent rooms carries the name of a famous guest, including Sir Arthur Conan Doyle, Henrik Ibsen and Roald Amundsen. Those on the full itinerary get the pleasure of a two-night stay here; but after a restorative stop, I cycle on, completing the day’s 150km loop back at the Storfjord Hotel.

My third and final day should technically be the Queen Stage, which sees guests hop into helicopters for a thrilling ride to the approach of the Trollstigen. Famed for its dramatic profile and hairpin bends, Trollstigen is an 18km-long power-ride with a climb of 850m. But late-May is still early in the season, and the road is still blocked by snow. I ride an alternate route – which is eventually cut short by fierce torrential rain.

I call it a day at a coffee shop in Geirangerfjord and am grateful for the support vehicle – and the mid-afternoon return to the hotel, which allows me to indulge in some do-nothing hours in the tranquillity of the spectacular surroundings. Before the trip, I was confident of the spectacle this landscape would deliver; my expectations for what the cycling would hold were decidedly modest. What an outcome to be able to say that after three days and some 350km in the saddle, I’ll head home with no doubt that this stretch of Norway’s coast is a bona fide cycling destination; one I’d recommend without reservation to seasoned cyclists and novice friends alike. As for me: I have a feeling I’ll be back one day – next time, in full summer.

Fergus Scholes travelled as a guest of 62°Nord, on an abbreviated version of its six-day Ride The Fjords Adventure, which costs from £5,760 per person not including international flights, 62.no

Save the date for Saturday, September 3 to listen to over 100 authors, scientists, politicians, chefs, artists, designers, wellbeing experts and journalists at Kenwood House Gardens, London. Choose from 10 tents packed with ideas and inspiration and an array of perspectives, featuring everything from debates to tastings, performances and more. Book your pass at ft.com/ftwf